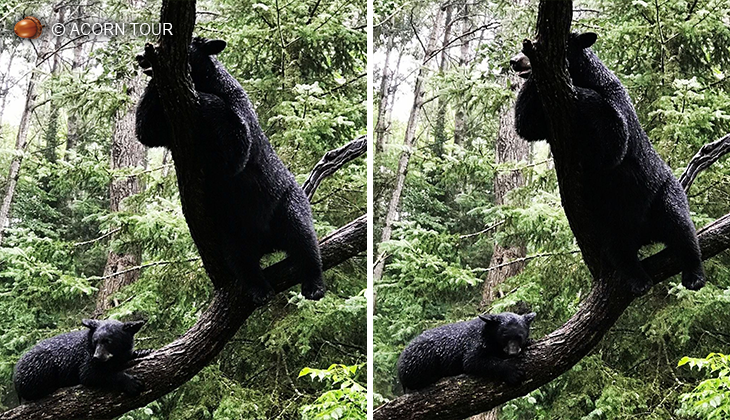 What should we do if we encounter a bear in the forest? Fight with it? Punch it? Pretend to be dead? Climbing on a tree? Run away? Stand still?

【Little Story 1】 Encounter with a bear in the forest I

Part 1
Mr. "Wolf" only ate venison. We asked him why. He said that because the wild wolves here were extinct, causing a lot of deer. He took his partners (several semi-wild wolves) to hunt in the forest with him because they must eat fresh meat to retain their survivability. (So ​​they went hunting in the forest a few days every week.) He hoped to slowly balance the ecology of the forest with his small action.

Mr. Wolf only ate crows. We asked him out of curiosity. "Why? Is crow meat delicious?" He said it was nasty, even if you give it to the wolf, the wolf would not eat it. "Then why do you eat it ?" He told us that there were too many crows, so he wanted to maintain the ecological balance. He went on to say that some people in Kansai, Japan also ate crow.

One day, Mr. Wolf took his (wolf) partner to hunt in the forest. They met a cute little bear.

Soon the mother bear smelled around and brought the little bear away. (Maybe he smelled like crow?) He felt lingering afterwards…

The phrase “Caution Bear in Area” is heard often and has two meanings:

(1) "Caution Bear in Area" pasted on a car means there is my wife in the car, and she is as fierce as a bear, so please be cautious.

(2) The road sign "Caution Bear in Area" means there are indeed bears here.

A tour guide who specialized in ecological and hiking said that there was a real story that happened in Hokkaido over a hundred years ago. There was a huge big bear, which was even larger than the average adult bear. It invaded a house and caused harm. Later, people teamed up a hunting group to start the bear hunt in order to get revenge. Eventually, they beated the bear after a few lives were taken.

We deeply understand that this was a story of the loss of both sides. This family lost their wife and children. On the other hand, this big bear might also be the bear king in the forest, and it could be a loss of a leader or a bear’s father in the world of bears.

Thinking from another side, because of deforestation and over-development,  the living space of animals has been violated, making it difficult for them to find food. The starving animals cannot hibernate and are forced to infringe on human living space, causing one and another tragedy.

【Little Story 3】 Encounter with a bear in the forest II

Part-1: An American tour guide who loves outdoor activities said that he had a hunting experience at the invitation of a friend. He saw a bear during the hunt. When he picked up the gun, he suddenly thought, why hunt it? They lived well and happily in this forest. Why did we have to separate their family? Then he put down the gun.

【Interesting】 Why not use an umbrella when it rains?

Once it rained in a wild black bear conservation area in North America, we were the only ones holding umbrellas. Local tourists enjoyed the feeling of strolling in the rain. Suddenly, a little blonde girl saw that we were all holding umbrellas, turned to her mother and asked.

The little girl asked, "Mommy, what is that?"

Mommy said, "It's an umbrella."

The little girl kept asking, "What is the umbrella for?"

Mommy said, "It's used to keep out the rain on rainy days."

The little girl asked, "Then why don't we hold an umbrella?"

Generally, Europeans and Americans are not used to holding umbrellas. Whenever there is a little rain, they will enjoy the rain; and when there is the sun, they bask in the sun and enjoy the natural weather.

Asians are afraid of sunburn and rain when traveling. People from all countries have their own protective habits.

What is "face bikini"? It is popular in China now.

All content published on this site that except the items shall not be the subject matter of Copyright Act that such as laws, orders, text of speeches, news releases and etc., please refer to the Article 9 provisions of Copyright Act the others all protected by Copyright Act including textual narratives, photography, pictures, sound recordings, images, and other information. No one may misappropriate, reproduce, transcribe, or distribute part or all of the content without the consent of the original author.